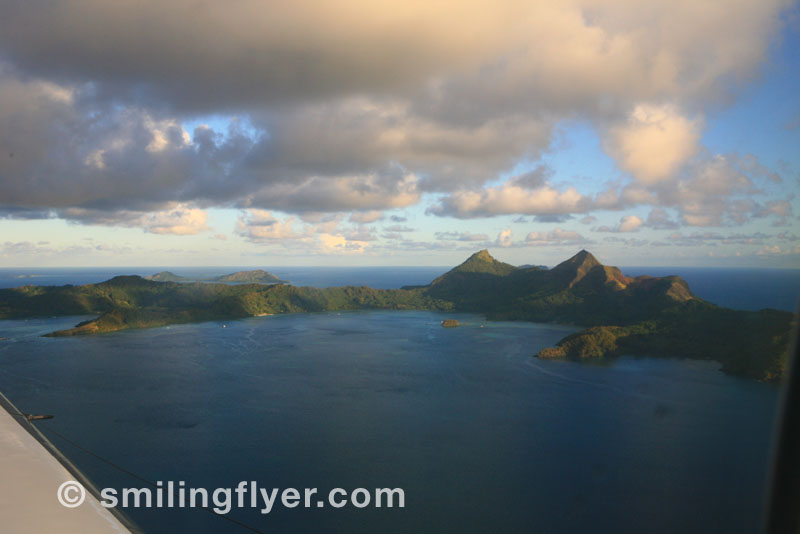 In Tahiti the 4 were happy to meet the 2 again to enjoy some G-force!

A long flight ahead, we all were prepared well. Wolfgang and Tom coming from Rarotonga were already in flight-mode, but Uno, Morten, Ran and Sven couldn’t wait to get on board to leave Tahiti. Sounds weird but true!

One hour after arrival at Tahiti Papetee airport, the whole smilingflyer crew was airborne again and very keen on landing on Totegegie, the one-strip airport of Mangareva island. Wolfgang did very well, flight was smooth, and after 4:15 hours and having passed the last coral atoll in the pacific on the way to south america, Mangareva island was in sight. We came in just before sunset, and had some amazing views when we flew once around the island.

But the best part was landing on a runway which is built on a coral strip right in the middle of the Pacific Ocean. Water to the left, water to the right this was an awesome approach and exciting landing.And everything went perfect!

Also, the firemen and guys with the fuel were already there and waiting for us to refuel the plane. That happened quickly before sunset, and as you can see they had the proper equipment. No wonder, as this island is used once in a while by military.

Mangareva is one of those islands you can call a paradise on earth. Beautiful volcanic mountains, jungle, flowers, white birds and tropical climate.As long as you hear that it was contaminated by fallout (Water droplets, dust and other debris from the blast that are contaminated by radioactive elements) when a nuclear 30-kilotonne blast, codenamed Aldebaran, on July 2, 1966, affected the island.

We learnt that from a men we met next morning at one of the places we stayed in. He stands for the right of the islanders to have more medical attention.Well, we had a fantastic night under an open sky with millions of bright stars, had great food and enjoyed our stay although a lot of little creatures and cockroaches made sleeping very difficult.

Early the next morning Tom again had a unique photo opportunity by shooting the smilingflyers and the legendary G-ZUMO on the runway of one of the most remote places on earth. Great radioactive pictures? YES!