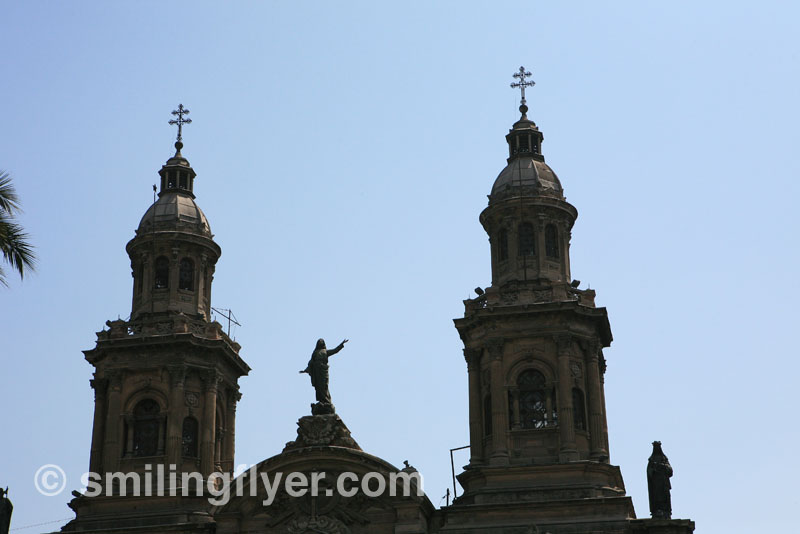 Nobody of us has been in Santiago de Chile before, so we all were very keen on how this city would look like. And we were quite surprised, that this nine million metropole is very clean, in order and on a high level. Very european style, wide streets, low buildings, a lot of trees, parks and wealth. Morten went directly to see the danish embassy of course and we went out with Paul Erik Bligaard who works at the embassy. Also we met Carlos from TMF, who was very kind to invite us for dinner.

For the next day we decided to have a look around the town, and thought the best way to do so would be the Touristik Bus. Not a bad idea, we had fun driving around and hopped on and off, but it went very slow. If we would go that slow around the world we would’t make it before grow old, man! But nice city, as mentioned. I think we stopped four times for coffee to satisfy coffee junkie Morten and had also some fun on the street with some comedians, being the center of attention for a minute. The living golden statue refused to to the smiling surfer so he got only 100 pesos, and we went up to a hill with great views over smoggy Santiago.On the 30th we left in the morning for the airport, and had some hassle with paying the fuel and handling for the stop at Robinson Crusoe Island. The company really charged a slightly overpriced US$ 19.00 per litre (normal price is US$ 1.00). That of course had to be discussed and took about 3 hours for getting a discount!

We landed in Buenos Aires late afternoon and after check into Hotel went for checking out the night life.