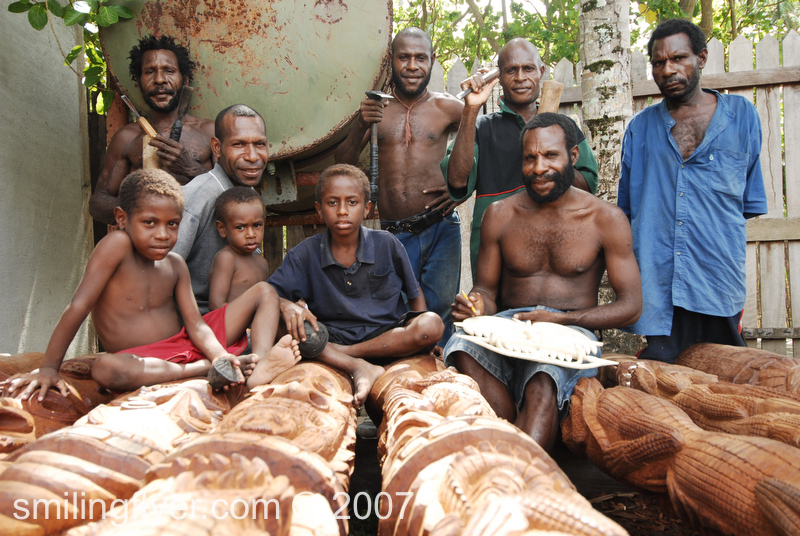 I just got back my laptop back from the police as I am writing these words. Go ahead reading and you will find out what happened in Papua New Guinea.
We shared a sense of excitement as we left BIAK, Indonesia for WEWAK, PNG. Our paperwork was in order, at least that’s what we thought. The locals took a different view – we were greeted by “police” one dressed in pyjamas, some carrying weapons and one with a golf club (7 iron we think). Passports were confiscated and things were tense.
-Are you mercenaries? we were asked.

The reason for the tension became clear as we learned that Prince Edward was due on a visit on Wednesday. Some friendly folk arrived as the police disappeared in their pickup trucks. We phoned home with news of the excitement but that we were safe.

The next morning we met a colourful gold miner from Bulgaria called Lubo. He took us under his wing and showed us some interesting artifacts at his house.
Years ago he set up a mining company looking for gold in the rich areas of the country and has been very successful in developing machines to get the gold from the rivers. We all listened to his stories, had a look at his video presentation of the gold washing adventures and had some beers with him.
Living right next to the prime minister he told us about his good connections he has in this country and that he wants to bring more people down there for quality tourism.
We had a fantastic dinner in freedom at the Windjammer Motel, joined by the german owner Hugo, who since fifty years lives in PNG and also was some years in government. We had a lot of fun joking around and Hugo told us many stories out of his life. Next day our plans were changed a few times as options were exhausted, but we drove out of town to a great beach and saw the location of the Japanese surrender in 1945: Wom Beach.
Here we had a great jungle-style BBQ and went snorkeling, walked at the beach, met some local children and played around frisbee. As Lubo knows a lot of nice places, he took us to a river in the jungle where we also met New Guinea folk and said hello to them. On our way back to town, surprisingly two white Toyota Landcruisers, one packed with armed troops and the other with police blocked the road and made us stop.The only explanation for this was that they have questions and wanted to search all our bags.
The convoy travelled to our hotel, where Lubo was told to leave and not to have any kind of contact with us anymore. Armed soldiers were all around the hotel, in our rooms we had to open our bags and all electronic items, including communications equipment and passports were again confiscated.

This was more serious! We were taken to the police station and questioned:
Why are you here?
Do you have terrorist connections? Have you ever fired a gun?
Have you worked for the Military?
When did you meet the other mercenaries?
You will come with me to the memorial site and show me where you planted the bomb!
Then, bizarrely, Are you working for the British government as an advance security party? If so, you must tell us now!

We spent hours there waiting until they finally finished questioning. Jorn, our pilot, had to spend the most time being questioned by a Central Intelligence member.

Long after dawn we were taken to our hotel again, where we were held under house arrest. At least we could enjoy a good dinner and a glass of wine before sleeping. We then learned the British dignitary is not Prince Edward but the Duke of Gloucester! and the Hotel we are now in is the one he is staying in. We were moved to another location, but hope was in sight – they wanted us out of the country before the royal visit – and we wanted to go!!!

Strings were pulled and at 2:30 pm we lift off from the hell-hole-destination to Cairns, Australia.
Jorn the pilot took G-ZUMO round the field to give the waiting crowd a wing waggle farewell at low level – then we were off!